Author Ann Patras in the news

Packing a bag and heading half way around the world is a dream for most people but for Ann Patras and her family it became a reality to write about. The 67-year-old was born and raised in Burton, where her life was full of people through her family’s corner shop and her parent’s pub but it was back in 1971 that she decided to make a change. 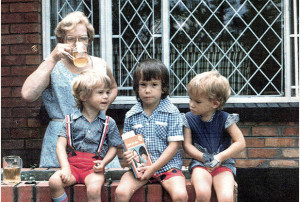 CONTRIBUTED IMAGE – Leon Patras
Photographs of Ann Patras and her family, showing what it was like growing up in Africa.
Nancy and Kids in 81

She emigrated to Canada for a year before heading back to the UK and marrying her husband Ziggy, who she had been with for five years. In 1980 they decided it was time to move on so they rounded up their three children and headed to Zambia, initially on a two year contact. They eventually left Zambia in 1989, moving down to South Africa where they lived for 22 years.

On leaving school Mrs Patras started work as a legal secretary, changing tack to administration in the brewing industry after she got married.

Being officially not permitted to work in Zambia, her time was occupied by voluntary posts with various social or sports organisations.

“Working with Ant Press has been effortless. I am thrilled with the finished product and with the service that this incredibly friendly company provided. I cannot fault Ant Press and would highly recommend them. Looking forward to presenting my next book to them in the future.”

Lorna McCann
How Not to be a Soldier