We are delighted to announce that the latest in Jacky Donovan’s Animal Heroes series is on special offer pre-order until 15 March 2016.  “Smoky: How a Tiny Yorkshire Terrier Became a World War II American Army Hero, Therapy Dog and Hollywood Star”, is narrated by none other than the little dog herself, and is only £1.99/$2.99 currently. A paperback version will be available from 15 March too. 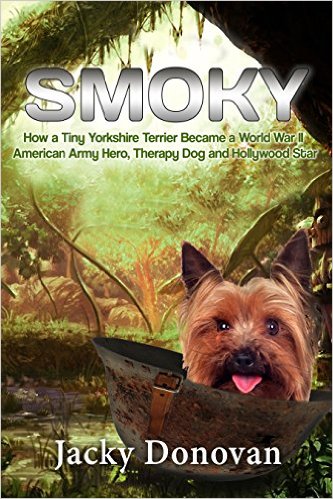 Here’s a peek at the synopsis, followed by the Amazon links:
When Smoky, a tiny Yorkie Terrier, is miraculously found in a foxhole in the steaming jungles of Papua New Guinea, she has no way of knowing she will become a World War II hero and Hollywood star. Flying with her new owner, Corporal Bill Wynne, on deadly combat missions, she is soon assisting the war effort, entertaining and bringing comfort to the soldiers with her unique tricks and spirited energy.
Based on the true events of the American Army’s wartime struggles and Smoky’s subsequent outstanding television career, her moving and uplifting tale is sure to entertain and touch the heart of all who read it.

If I haven’t thanked you before, I would like to officially thank Ant Press, (both Vicky and Joe) for your dedication, hard work, putting up with me, your encouragement, and all the other adjectives which have helped me on my way to at last getting ‘The Multicoloured Hat’ established.
You have been amazing, more than the call of duty.